My blog has transitioned to my web site: https://leeyamehta.com/
Posted by leeya mehta at 9:09 AM 15 comments:

Short Story: The Woman Who Willed Her Son to Die

Published in ‘The Reader’, No. 14. http://www.thereader.org.uk/magazine.aspx

The monkey sits
On a Gulmohar tree
And strips off the flowers
So wicked is he!
Into his mouth he pops them
One by one,
Till the mali shouts
And makes him run!*

Sheroo Aunty was saying to us as we waited for the lift, “Sorry, ah, really sorry. She does that every time he visits. I don’t know why he comes. She should be put away, but her husband loves her so much, he won’t allow it. He worships her. Su kariye, what can we do? This is their house also. Sorry darling, sorry.”
We went on to Lohar Chawl to buy panties – you got them on the pavement, three for twenty-five rupees. Nice soft cotton panties. We also bought a small blue bucket to soak socks in.
On our way home we decided to buy two little spring chickens for dinner. I think we were inspired by Sheroo Aunty. It was a rare treat, a break from mummy’s cabbage and chappati. It was five in the evening. Fortunately Francois Maison, the butcher’s place, opened after his afternoon siesta at four. He weighed two chickens and it came to seven hundred and fifty grams for both of them.
We roasted the chickens and ate one each, listening to a cassette of ‘Camelot’ on the stereo. It was my favourite tape and I sang along.
Three days later, I returned from school at one o’clock as usual in my carpool and decided to play a practical joke on mummy. The front door was open. I wrote a ransom note and stuck it on the floor and hid in the toilet. Time passed, I think maybe about five minutes. There was no sound of panic. I waited and waited, maybe five more minutes and finally, hungry, I was too impatient to wait any more. I emerged to find mummy making my daily lunch of cabbage and chappati.
“Mummy!” I said, “Look I was kidnapped, see, here’s the ransom note. I escaped just in time.”
She laughed and hugged me. Then I sat in her lap and she cuddled me. “Would you like mushrooms for dinner?” she asked, “To celebrate your escape?”
“Yes, please,” I said, mushrooms were my favourite, made with white-sauce and pepper.
I ate my lunch. I washed up the dishes and went and played with my Lego. I built a house, for the hundredth time. Mummy was sleeping and I kept it aside to show her. Then I took out my small blue uniform for ironing. The ironing board was in a cupboard built by Bachubhai, the best carpenter in the world. He was six foot five inches tall and very gentle. When mummy fell off a stool and broke her jaw he was so upset by the blood that he fainted. I ironed my uniform and sat on my cane chair at my desk and did my homework. I was glad that we had five days to ourselves. Mummy and me.
The phone rang and I ran to it, barefoot. When daddy, my stepdad, was at home I was not allowed to run to the phone, I was not allowed to walk barefoot, he would come home from the office and examine the top of the fridge for dust and scold mummy if there was any to be seen, he would check if anyone else had used his bathroom. His bathroom always smelt of anti-dandruff shampoo, Selsun.
“Mummy,” I shouted, “It’s Sheroo Aunty.”
Mummy didn’t like being woken up from her nap. It gave her a headache. She came into the hall and sat down with the phone in her hand.
She was silent after the phonecall. She didn’t say, “Oh how inconsiderate people are to call at three in the afternoon. Such bad manners.”
I went into my room, and finished illustrating my composition book. We had been asked to write about aliens and draw our own alien. Mine was purple with many arms. Mummy says, “You are what you eat.” They ate only brinjals on the alien’s planet.
Mummy came in after making a few phonecalls. She sat down on my bed and said, “Sometimes it’s good to have a TV. We could see what was happening on the news. There was an Air India plane crash. Ratan, Feroza Aunty’s son, was on the plane.”

Note:
*From the unpublished poems of A.S. Shroff, the author’s grandmother.


Published in ‘The Reader’, No. 14. http://www.thereader.org.uk/magazine.aspx

To  find the latest edition of The Company We Keep click here: 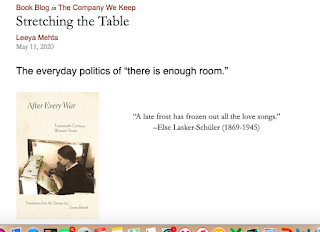 Column: Conversations with Myself

The latest edition of my column, The Company We Keep, is a reflection on isolation, as I strive for perspective during the COVID-19 outbreak.

http://www.washingtonindependentreviewofbooks.com/features/conversations-with-myself
Posted by leeya mehta at 11:23 AM 2 comments: 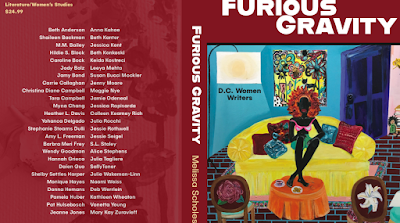 If you are up for a little literary distraction, grab a cup of tea (and toast, if you must) and join me for a reading from my short story "How Does One Make a Woman Like That Happy?"

Jamie and Julia met at Oxford. “Through that first Winter holiday away from her he had regretted it—it was too new, too much—but back at school, she had taken control of his free fall and said, stop by for toast if you want, and he had.”

They lived a dream life.

But will Jamie's jealousy get the better of him?

As they swim out into the Delaware Bay, what will happen?

Read my story in Furious Gravity, an anthology of Washington-area writers.

I'm overwhelmed by the number of people who put this book together, and so many thanks to the ship's captain, Melissa Scholes Young.