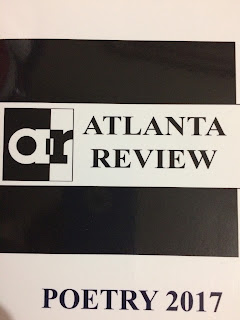 Refugees, circa 926 - International Publication Prize, in the Atlanta Review, Dec 2017
(This poem is one of a series of three poems.)

The boat is too small for so many
and only the twin babies sleep,
drunk on milk and swaddled tight
rocking against their mother
as the men row hard into familiar waters
of the Gulf of Hormuz for the last time,
the starlight on the receding mountains
dimming fast until what is left
of this new moon night is the abiding
light from their holy fire, fed carefully
by their priest with sticks of sandalwood
pulled from deep in his white robes, as he looks east
into the black Arabian sea.

All the joy and blood that had come before already turning to myth,
he counts how many generations it takes to go
from conqueror to refugee.

Gold bangles ring out as the baby girls are given
to their grandmother, then great grandmother,
and passed back to their mother, seventeen,
back erect, hair like molten copper
fawn brown eyes flecked with green,
hiding tiger, quick to anger,
as quick to forgive the every day abuses girls
seem not to know they carry.

The father, twenty-five, son of a farmer
named after his father’s father, and he his,
the same names reaching back into old Persian towns
winding up a river into orchards,
where they planned this winter voyage,
had four boats in sight ahead,
and six behind him,
but now they are hidden by night
as they row with speed, the wind still,
the vessels arrows through the air.

So, when tired eyes stir with the new dawn
and the babies tug with little hands to drink,
steam from their breath against her chest,
their mother lifts her head as the men cry “Land!”
she does not expect rose petal beach, like silk shivering before her.

She pulls herself to her knees to look
at this land at the waters edge that shifts and stirs
as if it is made of wings disturbed by the coming of her people
only to gasp, as flocks of long limbed flamingos
rise up into the sky and scatter,
revealing a sanctuary of white beach.