Save the date! And join us on April 20 at 11am. "Riding through Despair" explores Chilean poet #RaulZurita following the 1973 overthrow of the Allende government, Chinese poetry, Valmiki’s Ramayana, Alexander Xaver Gwerder (1923 - 1952), a Swiss poet, Dom Moraes and more!

Riding Through Despair
Panel for 2018 Split this Rock

We citizens of the twenty-first century are not the first to know suffering, political oppression, and personal anguish. Yet our contemporary world often feels more complex and more threatened than we imagine the past. In this panel presentation five distinguished writers will explore how we confront the difficulties of our own culture through cross-cultural understanding and literary translation, including examples such as the Chilean poet Raul Zurita following the 1973 overthrow of the Allende government, interactions between family intimacies and physical geography whether in India or the United States, the new Chinese poetry emerging near the end of the Cultural Revolution, and responses to the complexity of despair in Valmiki’s Ramayana. Through their own experiences, as well as through the lives and writings of poets they have translated, the panelists will attempt to convey, among other topics, the possibility of “riding through despair.” Each panelist will make a brief but substantial presentation relating specific questions of translation to the broader issue of cross-cultural understanding. All five will share thoughts among themselves regarding the topic, and then allow about half an hour for questions and comments from others who have chosen to participate in the session.

Leeya Mehta is the author of The Towers of Silence. She has just completed a novel, Extinction. Leeya is the winner of the 2016 Readers’ Choice Award in poetry from DistrictLit and an International Publication Award in 2017 with the Atlanta Review. She is an editor at Plume Poetry. Her work has appeared in District Lines, the Beloit Poetry Journal, Origins Journal, Beltway Poetry Quarterly, Fulcrum, Poetry London, Vinyl Poetry, and many other publications.

Anna Deeny Morales is a literary critic and translator. Translations of Raúl Zurita’s works include Purgatory, Dreams for Kurosawa, and Sky Below: Selected Works. Other recent
translations include Mercedes Roffé’s Floating Lanterns, Alejandra Pizarnik’s Diana’s Tree,
and Amanda Berenguer’s The Identity of Certain Fruits. Her essays and translations of Gabriela Mistral, Nicanor Parra, among others, have appeared in the Paris Review, the Harvard Review, and BOMB. Deeny teaches at Georgetown University and is writing a book called Other Solitudes.

Vivek Narayanan's books of poems include Universal Beach and Life and Times of Mr S. His honors include fellowships from the Radcliffe Institute for Advanced Studies and the Cullman Center for Writers and Scholars at the New York Public Library to work on his current project, an experimental translation from the Sanskrit of Valmiki. He is Co-editor of Almost Island, a ten-year old India-based international literary journal.

John Rosenwald has engaged with Split This Rock since its inception: co-editing Beloit Poetry Journal chapbooks in 2008 and 2012; organizing sessions (Poetry in China: A Force for Change & How Political Engagement Affects the Writing Process, 2012; The Logic of Yoo, 2014). He has held Fulbrights in Germany and China, and has attempted through his translations, as well as through his own poetry, to help others understand the importance and complexities of cross-cultural interactions.

Marc Vincenz’s recent poetry collections are Leaning into the Infinite (Dos Madres Press) and The Syndicate of Water & Light (Station Hill Press). His latest work of translation, Unexpected Development (White Pine Press, 2018), by prize-winning Swiss novelist, poet and playwright, Klaus Merz, was a finalist for the 2105 Cliff Becker Book Prize in Translation. He is Executive Editor of MadHat Press and Plume Editions and serves on the editorial boards of Plume and Fulcrum.
Posted by leeya mehta at 6:06 AM 1 comment:

Three new poems out...! Thank you to Plume and Daniel Lawless! Find Nudes I and II in http://plumepoetry.com/2018/02/nudes-i-ii/ Also you can buy Plume 6 at #AWP - it has my poem Women in the Peace Memorial in it- many thanks to Marc Vincenz! 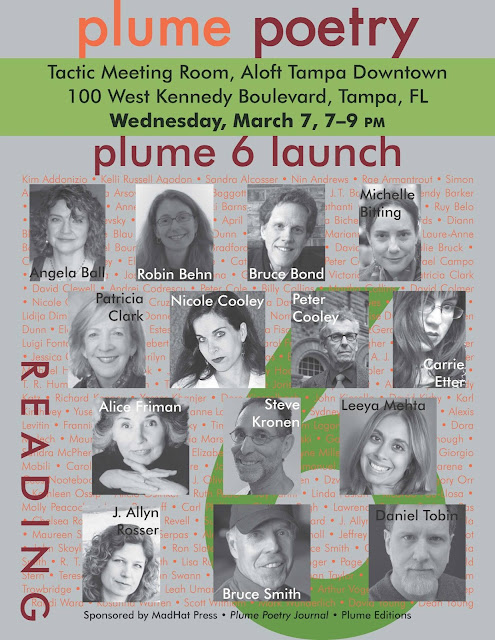 Come hear me read from this new series at #AWP in Tampa - Wed 7-9 at the Aloft.

They are part of this series in Vinyl. http://vinylpoetryandprose.com/2016/09/leeya-mehta/